Foraging for edible mushrooms is a fun and exciting way to spend your day. Whether you are a group of mushroom hunters or just getting started, the process of finding wild mushrooms can be simple with the right information. In this guide, we will cover everything from the history of edible mushrooms, mushroom identification, and where is the best places to find edible fungi near you.

The History of Wild Mushrooms

In ancient times, the wild mushroom was a delicacy enjoyed by all of society. The beauty of foraging is how anyone can do it and get a meal from their surroundings.

Throughout history hunter gatherers have relied on wild mushrooms for sustenance. Ancient civilisations like the Roman and Chinese empires also relied on wild food for the lower classes to survive while the tradition of picking wild mushrooms has been around for ages in the UK and Ireland.

The popularity of wild mushrooms has waxed and waned over time, but it seems that now is a great time to learn about edible fungi, since wild harvesting these tasty treats are more popular than ever before.

Mushrooms are unlike any other organisms on the planet. They are simply amazing! Fungi do not need other types of organisms to help them reproduce, and they can grow in a variety of different environments.

There are many different types of fungi such as gilled, polypores, slime moulds, and rusts.

Gilled mushrooms are types of fungi that have gills under their cap that release spores in order to reproduce.

Polypores are a type of mushroom that do not have gills but instead have pores.

Slime moulds are types of fungi that do not grow above ground, but rather they spread out over the surface of organic matter like compost and leaves.

Rusts are types in which spores release from a bright reddish coloured spore case called an apothecium on top of or next to some other type of fungus.

These types can be found all around the world, some even living in your backyard! However there is no exact number for how many species exist because new types continue being discovered every year.

There are currently about 100,000 different types of mushrooms with thousands more still waiting to be classified as their own specific type so it’s safe to say that you will never run out of mushroom varieties.

Although you may find a lot of different mushroom varieties while out foraging, only a select few are worth picking. The most popular types are Parasol, Morel, Chanterelle, Cep (Porcini and Penny bun), Hedgehog Mushroom, Oyster Mushrooms, Chicken of the woods, Beefsteak Fungus, Fly Agaric, Liberty Caps, St George’s Mushroom, Blushing Wood Mushroom, and Giant Puffball.

Parasol Mushroom: You can identify the Parasol mushroom by its tall, white stem with brownish scales on the top. The cap is very large and has an umbo in the centre that can be a different colour than the rest of it (usually yellow or orange). It’s edible but one of more common types to find foraged out.

Morel: This species is renowned by chefs for its deep nutty flavour and is widely considered one of the most prized edible mushrooms. The Morel mushroom has a conical cap, resembles an ear or pine cone in shape, and often grows under coniferous trees.

Chanterelle: Chanterelles are like little yellow trumpets popping up from the ground. Another tasty mushroom, they are edible raw or cooked.

Cep (Porcini and Penny bun): Often referred to as “the king of mushrooms,” the cep is a large edible mushroom that can grow up to 15 cm wide with a diameter, depending on age and species. It has been eaten for centuries all over Europe and Asia, prized especially for their flavour and what they bring to any pasta recipe.

Hedgehog Mushroom: Hedgehog mushrooms are edible, but should not be eaten raw because they can cause an upset stomach. It’s usually cooked before being consumed to eliminate the risk of getting sick from it and also is often mixed with other edible mushrooms when cooking.

Oyster Mushroom: The edible oyster mushroom grows on hardwoods such as oak trees and ash trees. A great species for novice mushroom forager as it has a texture similar to cooked chicken.

Chicken of The Woods: The chicken of the woods is a polypore found on dead hardwoods, particularly oaks. It has brown gills and white flesh with a delicious taste similar to portobello mushrooms.

Beefsteak Fungus: Certainly a variety of fungi that stands out, this red polypore is edible and tastes like a cooked steak.

St George’s Mushroom: This edible mushroom is found around St. George’s day, hence the name. It’s other name is the common white field mushroom you often see in on TV or in films like the recent Wild Mountain Thyme when Jamie Dornan picks mushrooms.

Fly Agaric: Fly agarics have been used in both Scandinavian and Russian folk medicine. They are edible but for the novice or beginner, I would suggest avoiding them as they can be hallucinogenic in large doses.

Liberty Caps: A small mushroom found in fields across the UK and Ireland, liberty caps are edible but be careful. They cause hallucinations and people have been hospitalised after a few too many of these mushrooms.

Poisonous mushrooms are often found in abundance, but they should be avoided at all costs.

If you’re new to mushroom hunting, or if you’ve never identified poisonous fungi before – it’s important that you know what signs identify a poisonous mushroom so that they can be differentiated from edible species.

The crucial rule is if in doubt leave it out. It is really not worth the risk. Although these are not definitive, some tips that will help you steer clear of poisonous fungi are:

If you’re interested in looking up individual species, the internet has a wealth of information and resources to help you as well.

Where To Find Wild Mushrooms

Mushroom hunting is a passion you can anywhere. Fortunately, you can find mushrooms in most locations around the world but there are some areas that experienced mushroom hunters will gravitate towards.

Mixed woodland is the most common place to find wild mushroom species. This is because fungi thrive in areas where there’s lots of decaying plant matter.

Trees that have large root systems, for example oaks or birch trees, tend to produce more leaf litter than other types of trees such as conifers and are great places to find an oyster mushroom or other wood loving fungi.

Mushrooms grow by feeding on decaying matter so look for fallen trees, rotting wood or tree stumps when searching for fungi.

In general terms: if you see any type of tree then chances are high that you’ll find some edible wild mushrooms nearby!

Running water and good drainage will naturally provide a good environment for mushrooms to grow. Areas that are moist and shady will also attract fungi which may be hidden under rocks or leaves.

Across the UK and Ireland there are many foraging and mushroom experts. These are people who have spent years researching, learning, practicing and teaching foraging courses so they are invaluable members of the foraging community.

The Go Gather Wild Podcast interviews such foraging experts so others can learn from their experiences. Friends of Go Gather Wild and mushroom experts include John Wright, Bill O’Dea, and Wild Food Mary.

Bill O’Dea has a degree in mycology (the study of fungi) and over 40 years foraging experience. He currently hosts his own foraging courses in Wicklow through his company Mushroom Stuff. Listen to our podcast with him here.

Wild Food Mary explores wild foods in Ireland as well as teaching courses on edible fungi. She is the person who introduced us to our first wild mushroom, so to listen to our podcast with Wild Food Mary click here.

Subscribe to get monthly foraging guides, hear about the latest podcast episode, or hear the stories of fellow foragers. 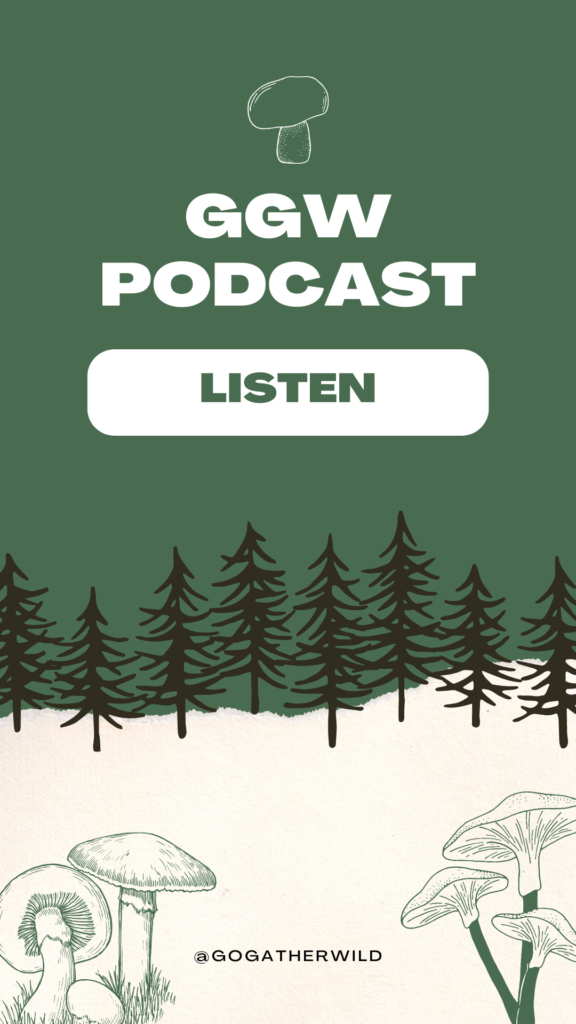 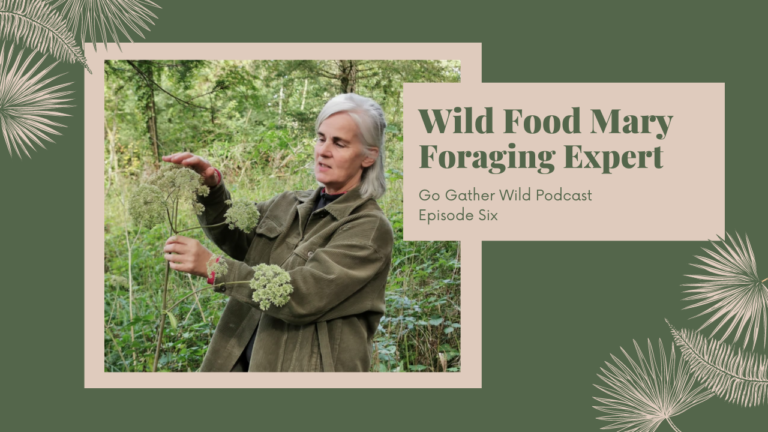 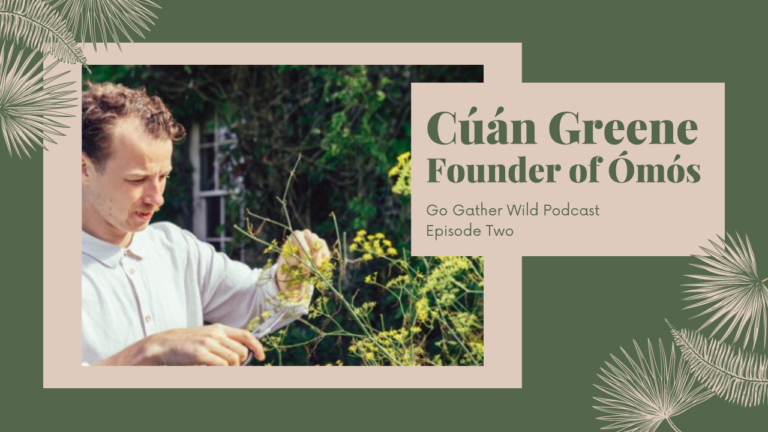